Rhys was one of our Trainee project officers as part of the UK Government Kickstart Scheme, which provides funding to create new jobs for 16 to 24-year-olds on Universal Credit who are at risk of long-term unemployment. He worked with us for six months on numerous community-based projects in and around green spaces, woodlands and rivers.

Rhys had always been passionate about the environment and conservation in his local area but felt a lack of practical experience prevented him from securing work in the environmental sector.

While working with Groundwork, he gained coppicing, habitat management, and horticulture skills and worked directly with the local community. He also obtained a Lantra licence to use a Petrol Powered Brushcutter and a Level 3 First Aid at Work qualification.

In mid-November, a Trainee Countryside Ranger Position became available with Caerphilly Council. Rhys felt worried about the application process, but we mentored him through each stage to overcome the internal barriers he faced. Rhys was successful in the interview and began his dream job as a Countryside Ranger in the New Year.

When we asked Rhys about his experience at Groundwork, he said:

“The skills I’ve acquired over the past six months are unparalleled. The mentoring and guidance I’ve received from all staff members has inspired and prepared me for my future aspirations in the environment sector. Without Hywel (Project Co-ordinator), I wouldn’t have had the confidence to apply and successfully achieve my long time goal of becoming a Trainee Countryside Ranger with Caerphilly Council, which is a huge opportunity for me.”

We hope to continue supporting more 16-24-year-olds removed from the labour market to get the personal and career support they need in order to find meaningful work that benefits them and the community. 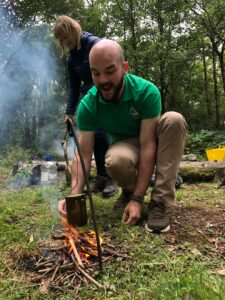