Mick Carney is 63 years-old and has lived in Clydesdale Tower for twenty years since being made redundant from his job as a tenancy support worker at a housing association. Mick lives on his own and told us he previously “suffered from work-related stress and anxiety”. 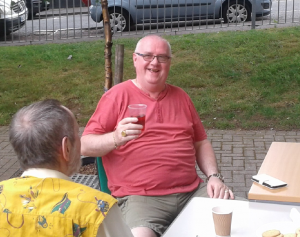 Mick at Fancy a Brew

Mick came to both Fancy a Brew launch events at Clydesdale and Cleveland Towers, as well as both coffee meet-up events. It was at these that Mick stated he wants to “meet his neighbours as he lives on his own”.

When Mick attended our first coffee morning at Clydesdale Tower he met Pete Aston, who happened to live in the same block. After discussing their interests and hobbies over a hot cup of coffee, Pete felt confident enough to explain how how he struggles to get out of his flat without any help from his carer/family members.

It was after this conversation that Mick and Pete decided to exchange phone numbers, with Mick offering to lend a helping hand to get Pete out into the city more to do shopping etc.

Both Mick and Pete have commented how they think what Fancy a Brew is aiming to achieve is “great”, and that they will be attending future events. As well as this they would like to be the first residents to begin arranging resident-led monthly coffee meet-up events in the towers’ community rooms.