Groundwork Suffolk and East Suffolk Councils worked together to raise awareness of the local natural heritage of the Rivers Orwell, Deben and Waveney. The project was funded by the East Suffolk Partnership, the Suffolk Coast & Heaths AONB and Sea Changers.

What the project involved

During the project residents, businesses, and schools in Felixstowe, and Lowestoft, and Woodbridge received information on the existence and status of local waterway habitats and the indigenous species that depend upon them. They also received lots of information on how you can do your bit to reduce litter pollution and plastic waste.

Activities during the project 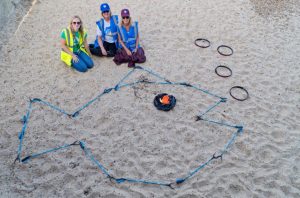 There was a series of events, workshops, and sessions with businesses, community organisations and schools taking place in the three towns. Many local people were engaged to discuss the Yellow Fish Campaign and what people could do to help improve their local water environment and businesses helped promote the campaign by displaying posters and window stickers on their premises.

Yellow Fish stencils were added to many surface water drains in the three towns to grab the attention of local people to find out more and make people think before letting anything but rainwater enter these drains. Residents in the areas were also visited so they were made aware of the campaign and to ensure as many people as possible knew what Yellow Fish meant.