What are we doing? Where and how it all began

Groundwork are working in partnership with Leeds City Council and Environment Agency, River Stewardship Company and Open Source Arts to deliver a project to encourage volunteers to take part in channel maintenance and stewardship activities along the River Aire in Leeds.

This is an exciting scheme to encourage local people to help with the management and maintenance of the River, to not only engage people in this wonderful local resource but also help to prevent future flood risk.

Why are we doing it?

Flooding can have a devastating effect on peoples’ lives, homes and businesses and protecting cities such as Leeds is absolutely vital.

On 26 December 2015, storm Eva caused significant and widespread flooding in Leeds from some of the highest river levels ever recorded.

The flooding was centered on the commercial/industrial area along the A65 Kirkstall Road and Stourton to the south of Leeds railway station.

To ensure this does not happen again the Leeds Flood Alleviation Scheme was launched.  It is a partnership project which is led by Leeds City Council and the Environment Agency.

FAS 1 began in January 2015 and was officially opened in October 2017. At a cost of £50 million, it is one of the largest river flood alleviation schemes in the country, providing increased protection to more than 3,000 homes, 500 business and 300 acres of development land.

FAS 2 is taking a catchment-wide approach. This means the entire River Aire catchment area will be considered to help reduce flood risk in Leeds including areas such as Kirkstall and Stourton. This approach will adopt a combination of Natural Flood Management (NFM) and engineered measures to help slow the flow and catch water further up the catchment so that flood peaks are reduced further downstream.

The River Aire Volunteers will engage in:

How does volunteering make a difference? 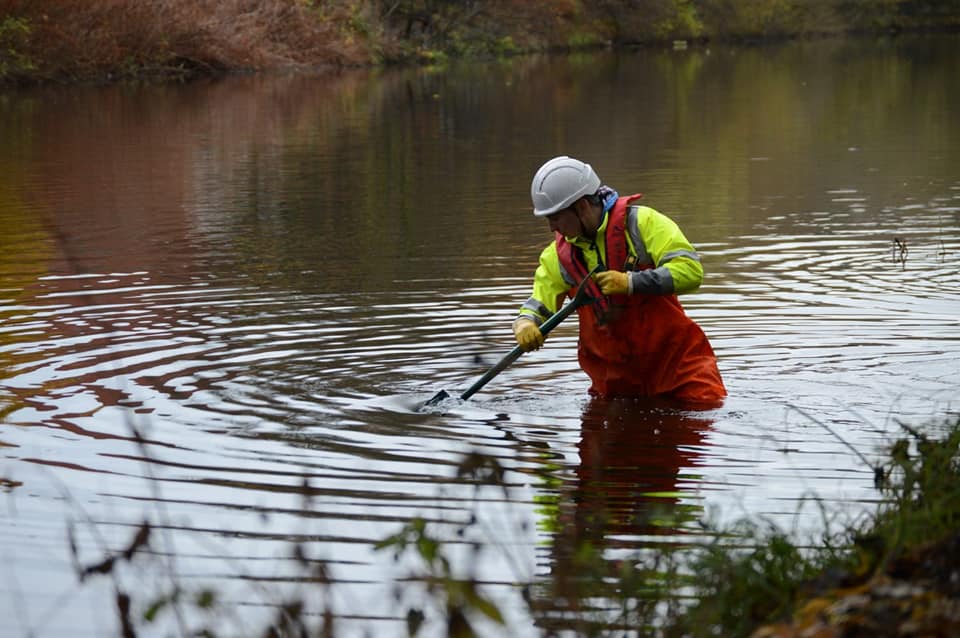 Last year we collected litter from the river and its embankment, managed over grown vegetation that could otherwise act as trap for litter and debris and cause issues with water build up, and helped to manage invasive non-native weed species. We recreated refugia and habitats for insects, birds and mammals living along the river banks and carried out surveys and bio blitzs to monitor what wildlife, flora and fauna were existing there. By having regular Monthly clean ups volunteers and organisations working collectively can make a tangible difference, improving the local environment, bringing more people to the riverside and helping to prevent future flooding.

The phase 2 scheme also includes a flagship natural flood management programme which will help reduce and control the flow of rainwater into the river. This will reduce the impact of climate change up to 2069.

The River Aire is a major river in Yorkshire, England, 92 miles in length. The Handbook for Leeds and Airedale (1890) notes that the distance from Malham to Howden is 58 miles (93 km) direct, but the river’s meanderings extend that to 90 miles (140 km).[2] Between Malham Tarn and Airmyn, the river drops 400 metres (1,300 ft).[3] Part of the river below Leeds is canalised, and is known as the Aire and Calder Navigation.

Plastic packaging generates significant negative externalities, conservatively valued by UNEP at USD 40 billion and expected to increase with strong volume growth in a business-as-usual scenario. Each year, at least 8 million tonnes of plastics leak into the ocean — which is equivalent to dumping the contents of one garbage truck into the ocean every minute. If no action is taken, this is expected to increase to two per minute by 2030 and four per minute by 2050. Estimates suggest that plastic packaging represents the major share of this leakage. The best research currently available estimates that there are over 150 million tonnes of plastics in the ocean today. In a business-as-usual scenario, the ocean is expected to contain 1 tonne of plastic for every 3 tonnes of fish by 2025, and by 2050, more plastics than fish (by weight).

Japanese Knotweed is a non-native invasive plant, and one of the most destructive plants in the United Kingdom. As well as having a negative impact on native plant species and flooding, if left untreated its growth can result in extensive costs to the property owner; including repair of damage to buildings and/or hard surfaces.

There are also legal implications when buying or selling property, as owners who have knotweed growing on their land now have a responsibility to manage it (recently upgraded from merely having to prevent it from spreading).

At 20ft tall with dinner table sized leaves Giant Hogweed is an impressive plant that was once planted in gardens.  However, it is highly invasive and has spread throughout the whole of Great Britain, primarily favouring river banks but also other areas such as parks, cemeteries and wasteland.

The sap of Giant Hogweed contains toxic chemicals known as furanocoumarins.  When these come into contact with the skin, and in the presence of sunlight, they cause a condition called phyto-photodermatitis: a reddening of the skin, often followed by severe burns and blistering.  The burns can last for several months and even once they have died down the skin can remain sensitive to light for many years.

A tall, attractive, annual herb with explosive seed heads. Although easy to identify as a mature plant with its pink-purple flowers, fleshy stem and characteristic leaves, the seedlings and last year’s dead stems of this annual are more difficult to spot.

Introduced as a garden plant in the early 19th century and first recorded in the wild in 1855. Often favoured by the general public for its aesthetic appeal and is still deliberately planted on occasion. Now widespread in the UK, especially along urban rivers. Spreads solely by seeds, which are small and easily carried by wind or water.

Out-competes native species in ecologically sensitive areas, particularly river banks. Where it grows in dense stands along river banks it can impede flow at times of high rainfall, increasing the likelihood of flooding. Die back of extensive stands over winter can leave river banks bare and exposed to erosion.

Himalayan balsam is listed under Schedule 9 to the Wildlife and Countryside Act 1981 with respect to England and Wales. As such, it is an offence to plant or otherwise allow this species to grow in the wild.

By volunteering and helping with our project, not only are you actively helping to make a real difference to help us deal with issues like plastic pollution, loss of habitats, flooding and the impact that this has on the city as a whole, volunteering is a great addition to any C.V or application form when applying for jobs. You will have your own tailored volunteer pack with recognised certificates to show milestones for your volunteer hours as well as learning a host of new skills along the way.

What are you waiting for?

We can’t wait to meet you