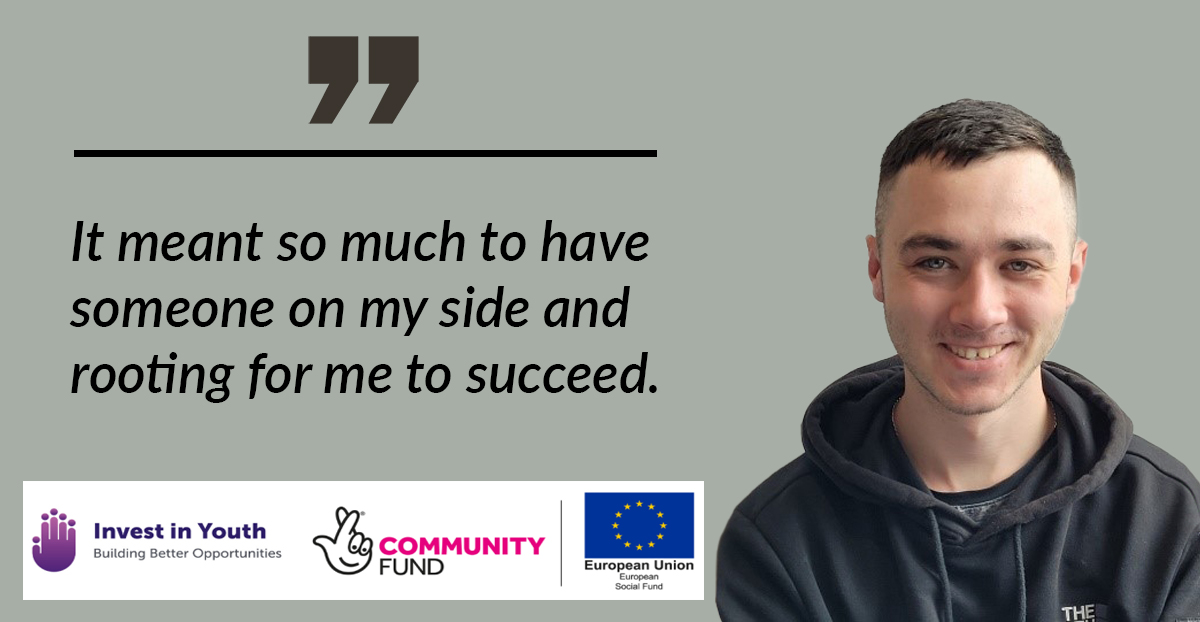 A great example is Callum, who is 22 and from Lancashire. Before he got involved in the Invest In Youth project, Callum had been out of work for 6 months. He’d also just found out he was about to become a dad, so he was desperate to find work and be able to provide for his new family.

Callum has a different style of learning to other people. Sometimes it takes him a little bit longer to pick things up and understand what people are saying to him. Throughout his life this affected his self-esteem and spilled over into interviews and the workplace, where he suffered from bullying. Callum previously had 2 jobs, the longest of which lasted a month. He said that he had ‘zero confidence’ in himself.

Callum was referred to the Invest In Youth programme by the Job Centre.  Invest In Youth is delivered in Lancashire by Groundwork. It aims to transform the futures of young people aged between 15 and 24 who would like to work but are unable to, without additional skills or support. After joining the programme, Callum was given a mentor to work with, called Rachel. Rachel’s first aim was to rebuild his confidence, which she believed was the main barrier to Callum getting back to work.

Rachel was brilliant. She had confidence in me, even when I didn’t have any in myself.

Callum appreciated the support and encouragement that Rachel gave him and threw himself into the programme.  He says: “Rachel was brilliant. She had confidence in me, even when I didn’t have any in myself. She helped me with things I‘d always struggled with, like filling in forms. I liked that Rachel showed me how to do things, rather than doing them for me, which is what people usually did.”

Rachel helped Callum with his job searches and often took him to job fairs. When she told Callum about a vacancy at the local arcade in Morecambe, he was very excited. Rachel spoke to the manager personally and explained that Callum struggles in interviews. She also explained how eager he was to work and spoke about his amazing work ethic. After an interview, Callum was offered a part-time job. With Rachel’s help, he worked out the times of the buses and trains he needed to get to work. Rachel even met him after work for the first few days just to make sure he was ok. It wasn’t long before the arcade manager recognised Callum’s potential. After intensive training, Callum was given a full-time role.

Callum says “I am so grateful to Rachel and to Groundwork. It meant so much to have someone on my side and rooting for me to succeed.”

All he needed was for someone to believe in him, so that he could start believing in himself.

Rachel Denby, who is a Youth Mentor at Groundwork said; “I am so proud of Callum. All he needed was for someone to believe in him, so that he could start believing in himself. Once he’d built his self-confidence, I knew that he would show everyone what he was capable of.”

Callum says that Invest In Youth has changed his life completely. He is now the proud father of a little boy and enjoying his new found responsibilities both at work and at home.

*Invest in Youth is part of the nationwide Building Better Opportunities programme, funded by the European Social Fund (ESF) and The National Lottery Community Fund to help tackle the poverty and social exclusion faced by the most disadvantaged people in England.