Jack has moved around from place to place his whole life, living in Ireland for 7 years with his mum before re-locating to Coventry, Derby and most recently Oldham.

In Oldham, he found himself staying at home all day; playing on the Xbox, smoking and not knowing where to make new friends and how to take his life forward.

His partner had previously taken part in the Princes Trust Team programme and had been encouraging him to sign up for years, but Jack felt his autism and lack of routine got in the way of him taking the leap.

After finding the courage to sign up to the Princes Trust programme, he’s never looked back – immediately feeling comfortable with his other team members he learnt new skills through a range of different team challenges.

Thirteen weeks later, following his graduation from the Team programme, Jack capitalised on a position that became available as a Prince’s Trust Team Assistant and with support from Michael, his team leader, and Rochdale Borough Housing for finding him interview clothes, his application was successful.

His passion for helping young people who struggle to communicate through disabilities lead him to join Groundwork’s Youth Advisory Board, a place where he could campaign for the charity on a national level, adding another milestone to his journey.

Originally Jack wanted to become an IT Technician, but since volunteering with Groundwork and gaining employment through the Princes Trust, he says he’s found his ‘Dream Job’, and hopes to build on his experiences to one day become a Team Leader. 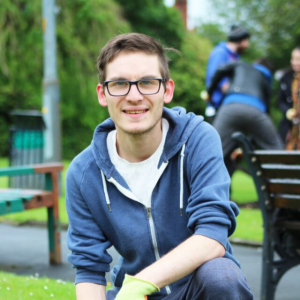